Retain Steering Wheel, Vehicle Display Functions, Parking & Heating Visualisations
While replacing the original equipment will not limit the functions, drivers will appreciate the ability to retain such visualisations and controls. The APF-X300VW is our solution that allows the customer to receive the same kind of images while operating the heater or air condition controls and also during parking. The interface will also support the VW radio display in the instrument cluster (MFD) and VW Steering Wheel Remote Control.

Supports Basic Functions of Original Steering Wheel Controls
The Alpine system is connected to your steering wheel control buttons. This means you do not lose this convenient feature when upgrading to Alpine and you will have control over volume, phone (hook on/off), audio track forward/backward and many other commands. You can even activate Siri voice control if you have an iPhone connected to the system – right from your steering wheel.

Retain Driver Information Display (MFD)
The small display in the instrument cluster is also connected to the Alpine system and can display radio station names, song titles and artist information, caller names, navigation turn-by-turn arrows (Where Navigation is installed and coded) and much more.

Retain Optical Parking Sensor Display
If your car is equipped with original parking sensors, you can continue to use this convenient feature when upgrading to Alpine. The parking sensor system is connected to your Alpine screen, showing a convenient distance display. Our 2nd generation of Alpine Style headunits features parking sensor display with much higher display detail.

Retain Climate Control Visuals Info
The headunit gives you visual feedback for the selected temperature of driver and co-driver, AC status, seat heating level, selected air vents and more. This screen will automatically appear for a few seconds when any of the named settings is changed to give the driver feedback. Typically this is only supported on VW’s that have the high end climate control system installed from factory.

Installed into a VW Transporter T6 with Alpine Halo 9 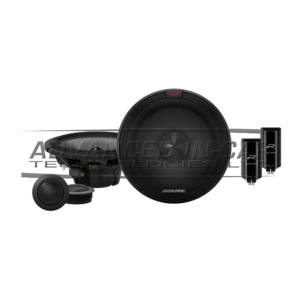 Alpine R-S65C.2 – Type R Component Speakers – 16.5cm & 300 Watt Output You’ll enjoy a center sound stage with speakers that play loud and clear without distortion. The R-Series speakers are tuned with emphasis on the high- and low-end frequencies, so they deliver power while naturally producing bright, active sound. These are the latest […] 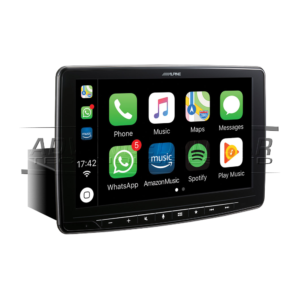 Alpine iLX-F903D – Halo 9 Digital Media System The Alpine iLX-F903D otherwise known as the Alpine Halo 9 due to it’s impressive nine inch screen size boasts some super amazing features such as Digital Radio, Bluetooth, Apple CarPlay and Android Auto. The Halo 9 is certainly the bigger brother of the iLX-702D and builds on […]

Pricing to be announced soon – Due Autumn 2021!

Alpine INE-W611D –  Touchscreen Multimedia & Navigation System The new INE-W611D navigation system is designed for passenger vehicle and motorhome customers that look for a flush-mount installation, rather than a tablet-style system. This unit is an amazing all-in-one solution with built-in iGo Primo navigation using TomTom maps, as well as a CD/DVD drive. The 6.5-inch touch-screen displays navigation […]

Alpine X903D-DU2 – Motorhome Touchscreen Camper Navigation with Swivel Display Alpine introduces the 3rd generation motorhome Alpine Style system for the Fiat Ducato III, Citroën Jumper II and Peugeot Boxer II. The X903D-DU2 features a huge 9-inch touch-screen with swivel function, that allows the screen to be turn towards the driver or co-driver. This makes it very easy to see and control navigation […]